Baby Moon Model and now correspondent Pearl also known as "Tatat Roses" is now a new pet mom. She writes her experiences with her new baby Sora. One day, she hopes Sora will debut the Catwalk. Sora is a baby Yorkie. 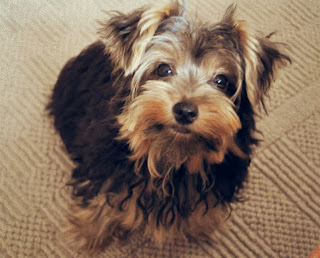 The Beggining
Sora came to me at the most unexpected time in my life. I remember one night after dinner, my mom just suddenly announced that she wanted to buy this puppy she saw at Cartimar. My initial reaction was that of skepticism. "What, a puppy? Don't we have enough pets already?"  I didn't think it was the greatest idea, honestly. (I had always prided myself with the thought that I was the most logical in the family, and having a puppy was just not logical even if I'm a super dog person.) My mom's enthusiasm was contagious though, and not long after, my little sister was also keen on buying a puppy too. I just sort of let them do what they want as I continued to do my own business, they wouldn't listen to me anyway. I just thought, whether they buy one or not, I was already set on my decision about not being too involve in taking care of the puppy.
But how wrong was I.
One night, I arrived home tired and sleepy from a photoshoot. Upon opening the door, my mom had greeted me with a  meaningful smile. Ah, "it" was home, I thought. I lazily went to the kitchen to check on "it." Mom had put "it" in a basket lined with pillows, and upon peering down on the mass of dark brown and tan fur, I felt my heart constrict.
"It" looked so small, so precious, so furry, so adorable, so soft, so.... lovable that my mind literally went blank on the sight of... him. Logic? What Logic? Mine already flew out of our 38th floor window and right into EDSA.

Sora VS Logic
My sister named him Kuro, but my mom kept calling him Sora, which sort of confused everyone at the house. In the end we gave in to mom's wishes and called him Sora. He was black and Sora means sky in Japanese but hey, logic was out of the window remember?
Sora is a Yorkshire Terrier, and when we got him, he was just entering his third month. He's got this really lovely black fur that has turns  dark blue when light shines on it, and his paws, it has got to be my favorite part of him. He's got these adorable tiny paws that I just want to kiss and nibble on every night when he's sleeping. It was love at first sight. I erased my former decision, I was going to take care of this puppy to the best of my abilities.
It was hard being Sora's mommy. I had never taken care of a dog before in my life. There were so many things I had to understand about him. There were so many things that I needed to teach him. There were so many things he needed to teach me. (And up to now I'm honestly still learning.)
Middle: Handling Sora
Most of the time I'd find myself searching in Google for tips and tricks in handling my baby. Sometimes I'd search just for the heck of it, from serious stuff like "yorkie seizures and dehydration" to the silliest things as "Can yorkies eat carrots?" It really does help, especially those yorkie forums.
Sometimes I'd find myself awake at 3 am and staring at Sora while he's sleeping, just to make sure he was breathing and okay. For the first few days of him living with us, I would put him to sleep in my lap first and then transfer him to his basket once he's knocked out, but as the days progressed he would wake up in the middle of the night and cry. That's when I tried to let him sleep beside me on my bed whenever I sleep in my sister's room. That way, he can cuddle against me when he feels lonely. Maybe that formed the bond between us, because I was the one who was always with him when he needed a mother figure. Up to this day he will always go and sleep beside me when I sleep in my sister's room. It's one of the things that comes automatically for both of us.
Training him to poop and pee in proper places was really difficult because we didn't exactly know how to deal with it. We live in a condominium therefore no outside space where he can run and do his business. We tried the newspaper thing but Sora didn't like peeing on newspapers. He prefers two spots in our home, the carpets and the entrance to my room. We just try to be careful walking in those places especially at night. I'm just glad he doesn't really pee on the couches or beds... right?
Feeding him was easy at the start because the breeder gave us dog food to feed him for the first few weeks. He was okay eating it and I made sure to schedule his feeding time to condition him. However, he got tired of the dog food and wouldn't even go near it anymore, which was a major dilemma for me. After countless Google searches for dog food alternatives, I came up with a list of vegetables and meat that would be good for Sora. He actually didn't mind the new food, and he really loved fruits. He developed a fondness for bananas but I only let him have one now and then since I like to feed him sweet things in moderation. As for the milk, I give it to him sometimes after I learned that he's not lactose intolerant. I also make sure that he drinks his water everytime I arrive home from school. (Sora can be very hyper and often forget to drink.)
The only issue I have with Sora is his excessive chewing on almost everything. Ever since he entered his teething stage, he has become very fond of gnawing on everything he can get his tiny teeth on: hands, feet, wallpaper, expensive shoes, flower decorations, books, plastics, papers, cockroaches and chairs. He has already destroyed my laptop charger three times. Disciplining him proved difficult because he always thinks I'm playing. I've become very strict with him now since his teething problems persist even when I have sought advice from my fellow dog owners. 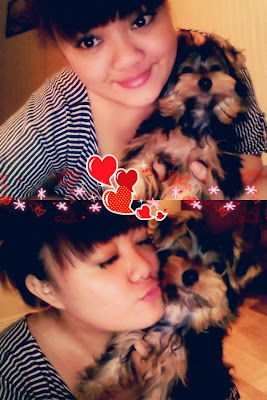 The not ending part
Ever since Sora entered my life, I have come to realize that being a dog mommy or daddy is no child's play at all. It's not as easy at it looks. You'll really have to invest time, energy and money. People who think that having a dog will be easy because "you only have to feed it and take it for a walk" should think twice about what they're actually getting into. Dogs, as I've learned, aren't play things. They have feelings, they are very temperamental and they require a lot of understanding and patience and love.