Last September 14, 2018, SM East Ortigas together with Ms. Bernie Alfonso, organized Royal Pawsh Runway. The exhibit ran from Friday up to Sunday, the 16th.
This post is dedicated to our very own designer Maita Rue of Baby Moon Pawprints. Each designer represents a province and she represents Davao. 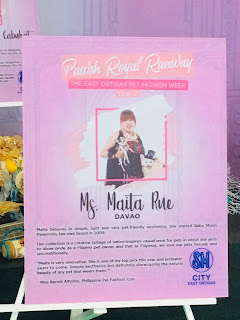 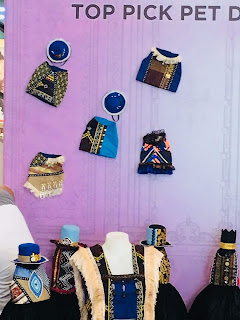 Designer Profile: Maita Rue hails from Davao (Region XI), she believes in simple, light and very pet-friendly aesthetics. Her designs were greatly influenced by her dogs and cats. Comfort is her utmost priority.

Cotton and coco-cloth is the predominant material as it is light and perfect for pet couture. The design theme recurring takes from the theme of Mandaya, Bagobo and T’boli tribes yet twisting it to her own modern flavor. The title of each piece is taken from a place which represents aspects of Davao. 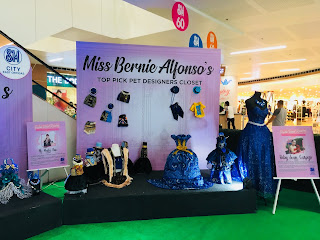 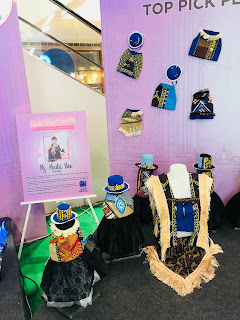 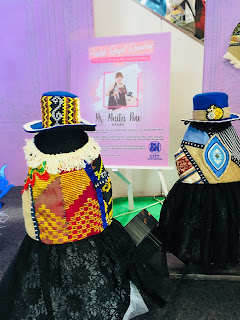 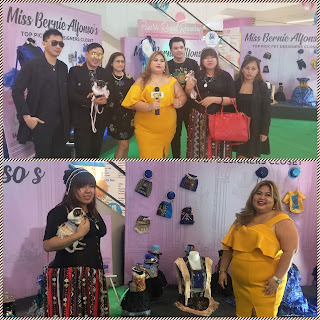 "Maita is very innovative. She is one of my top pick this year and probably years to come. Simple aesthetics but definitely showcasing the natural beauty of any pet that wears them. "
- Miss Bernie Alfonso, Philippine Pet Fashion Icon 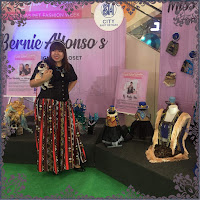 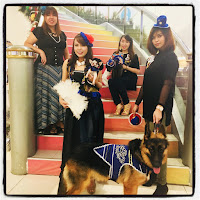 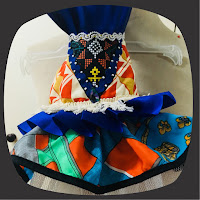 The Dreamer
Coco the Poodle is joined by her doggy-mama Katrina. Coco is wearing an outfit called The Dreamer. It is a collage of three prints. The colors are festive and the dress is fit of a celebration. The dreamer is a mix of the past and future. It may take inspiration from the past but it brings it forward to the future.
Coco is wearing a custom Baby Moon Mini Top Hat with ruffles. Kat is wearing a one-of-a-kind fascinator which is also themed as the Dreamer. 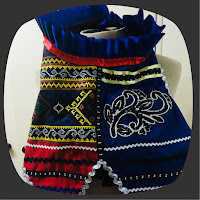 Madayaw
Modeled by German Shepperd Damien  and pet parent Sarah, this ensemble is called Madayaw. Madayaw means a melting pot of visitors. Davao is a melting pot of cultures. Many come for trade and education. One important draw of Davao is the celebrations. When there is an occasion, Madayaw Sa Dabao. This piece is a call to celebration and a coming together of friendship and harmony.
The predominant colors of Red, Blue, Yellow and White represent the Philippine Flag. The beadwork and print represent the festive nature of this outfit.
Damien and Sarah are both wearing a Baby Moon Mini Top Hat. It is a signature look by designer Maita Rue. 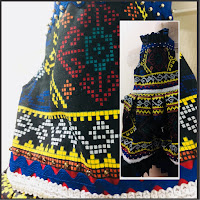 Hijas de Davao
Karla B is carrying Designer Maita’s Teacup Chihuahua, Chichi. This set is called Hijas de Davao or Daughters of Davao. This culminating piece is a long dress made of cotton printed with Mandaya print. It is dark yet still festive in nature. The predominance of brown, blue and black states elegance white the simple beadwork denotes industry of tourism. The Hijas de Davao is an evocative piece that calls to love its native roots. From the river, Davao rose to becoming an economic super power. She has never been conquered in wars or strife. She had a hidden power she keeps and uses to show her true identity. 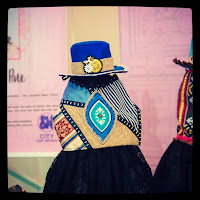 Boulevard
The Boulevard is a lively stretch. By day t is bustling area where hotels, offices and banks are located. In the evening, the street shops, food hawkers, masseuses and other night life attraction come out to entertain. The central seed represents life that grows from this community. 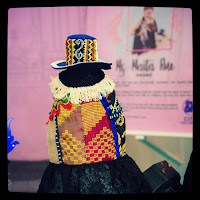 Agdao
Agdao, known for its hustling and busting market is represented in this piece. It is a Hodge podge of culture as well as trade. Each fabric is collaged as it represents aspects of Agdao and the people who come here. 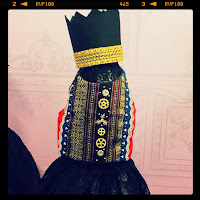 Santa Anna
The Santa Anna area or Uyanguren is also known as Davao’s Chinatown. It is the world’s largest Chinatown in land area. The red symbolizes the roots in China while the central panel represents the integration to Davao culture. Gears represent commerce and progress. 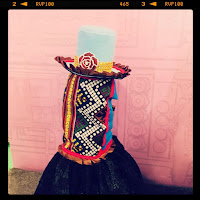 Calinan
Calinan is known for farms as it is the fruit capital of Davao. This colorful piece represetnt the frutis and flowers of Calinan. The gold is the sign of progress trickling into Davao because of the trade in Calinan. 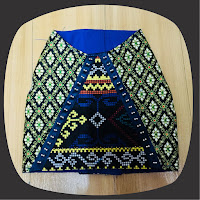 Eden
Eden is one of the greenest places in Davao. It has a nature preserve while attracting tourists to the many attractions it has. The triangular pattern represents the elevated height since Eden is high up the mountain. 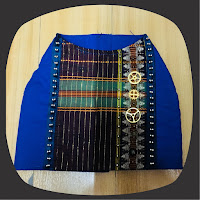 Damosa
Damosa is known for food trips and IT parks. The theme to this piece is the gears of business happening in Damosa. 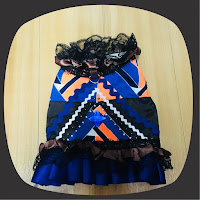 Bago
The rickrack and beads represent the river that was where Datu Bago founded Davao. The brown, blue and black also represents the color of the river. 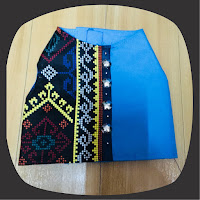 San Pedro
San Pedro area is a duality of two seemingly opposing forces: Christianity and Muslim, rich and poor, local and international. But in San Pedro, all these do not clash but harmonize side by side. 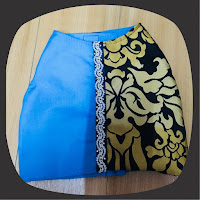 Matina
Matina is known as the place of the old affluent families of Davao. The gold and black brocade represents the nostalgia of where the oldest subdivision in Davao was situated. 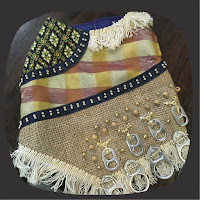 Sasa
Sasa wharf is the International port of Davao. The amount of trade passes through the wharf are phenomenal. The Blue lines mimic the map where Sasa Wharf is. The can tops represent boats coming and going through Sasa.
Posted by Baby Moon Maita at 6:00 AM